Madeleine Freund: Dear Susi, congratulations on your exhibition. To get started, what can you tell us about it?
SUSI GELB: I generally work in complex processes, and so for this exhibition I created an atmospheric lab situation which corresponds to my current research projects. I always find it difficult to remove a single, singular object from my oevre. What I’m interested in are situations, atmosphere and space, rather than “drop sculptures”. I want a process to become visible and I want different processes to be triggered for the viewer, too, different levels of understanding – perhaps something liminal as well.
In the broadest sense, you could characterize my working method as alchemical: Throughout the last year, I did many casts and experimented with combinations of materials. From this emerged a kind of lab situation … and the galvanized steel panels on the walls, which border the space, give off a sense of sterility and in this way a whole spatial situation is created. I really love how the panels create such diffuse reflections, which break up the room’s hard edges. Their materiality creates a kind of charge. Walter Benjamin defines aura as a feeling of distance in spite of closeness.

The objects on the table also have a mysterious effect on the viewer.
Yes, on the long table are laboratory instruments, primary products and end products, various lead and liquid resin casts and found objects such as two lube pads from the hardware store as well as a magnetizer/demagnetizer. The arrangement recalls a display case in a science museum, just without the glass top. Further back in the room an apparatus is hanging from the ceiling carrying out its own movement in a loop. It is constantly flipping its flaps and it has an independent existence. Due to randomized programming, the machine constantly receives new numbers and so flutters in changing rhythms, but always onward, without cease. The sounds of this machine, the continual flapping, is bewitching and distressing at the same time and somehow it also has something of a crazy measuring instrument that controls time regimes.

The machine recalls old train-station split-flap information displays, with all the flaps that would turn over…
Yes, it’s a subway display from the 1970s. Just like some people have a clock hanging in their office, I have this machine that you can’t directly read, but rather sense a tune. The flaps on the front are mirror coated and the surrounding space is being constantly reflected. The flaps on the back of the apparatus show an animation. I drew cloud formations directly on the forty flaps. The machine’s constant flipping through the loop of forty individual frames creates moving pictures, which show wafts of mist floating by, without beginning or end.

The animation is only visible when one looks behind the machine. Why this?
For me the exhibition space is a multi-perspective test area and I want the visitors to move in it. Therefore many details are not noticeable at first. On the galvanized metal panel behind the display there is a mirror triangle that reflects a part of the animation in a diffuse way. Many visitors first believe that the reflection of the shadow passing by is made by a projector. It is only on second glance that you realize that the animation is really being played in the machine, like an analogue projection. In this way, many different levels emerge. The mirror triangle seems to be floating in front of the galvanized panels, but what is reflected seems to lie far in the back. This creates an almost virtual level, although it is created in a very analogue manner.

Was this kind of drawing, animation, interesting to you earlier in your artistic life?
Yes, actually very early on in my studies. I was incredibly excited about the fact that you can create movement and rhythm through very simple drawings. From out of this fascination came many animated cartoons and flipbooks and I always thought about how you can present them best. That’s when I first thought of the flap-flipping machine, it is like a flipbook machine.

The title of your work, unspaced measures, refers to the materiality and reflection of the spatial installation?
The title refers to the whole and to the parts equally. I was looking for an overarching and mysterious title. “Unspaced” is an unusual word, which actually doesn’t exist and whose meaning is not quite graspable. For me art is always a horizon to be searched, so multi-layered and not fully penetrable by language and rationality; the title also reflects that. The machine flips through the forty panels without ever stopping but it always changes its rhythm. Chance is an important element in my work, as are rhythm and loops, especially in my video work.

Let’s go back to the table. You create the atmosphere of a workshop with it. But it is also a collection of tools and older works, like a collection and presentation of your artistic past. Does the arrangement follow a certain personal system?
Everything that is presented was created or found in the past year. The arrangement was put together intuitively, in a purely associative manner. The arrangement brings out a completely new energy between the individual objects.

Is there the perfect place?
Exactness is a fake… hm, the bronze enveloped in resin and the silver-plated pineapple, they are the centre. Both are completely new works. Everything else I arranged around them.

A work collage, a collage of your works?
Yes, actually for me it’s also like a catalogue of my works. By selecting, spreading out, arranging, and taking away, new connections are always created. In this arrangement something new developed, which, however, also fits with my personal mythology.

The large-sized works in yellow polyester resin they are the ones I know you for. This work is completely different. How did you decide to go in a different direction?
I actually realized some time ago that it’s not really about singular products. And yellow (Gelb) is an overarching term that doesn’t have that much to do with the colour. For some years now my works have not been yellow, but it has become an abstract concept. Once I noted, “Yellow is a substitute for something I don’t know yet”. For me it stands for energy, virtuality, ideas – and for experimentation as such. It’s about charging the material, about aura, about searching. There is also an aspect of speed and vulnerability. This ambivalence and alchemical connection (yellow = not-gold) are what interest me. But my works don’t always need yellow pigments for that.

The machine symbolizes your creative process, the sound of the flipping flaps your thought process…
I think in terms of networks, in an associative, barely causal or linear way. I live in Luhmann’s card index (laughs). I live in a cloud of non-hierarchical thoughts and ideas. Sometimes ideas and connections even come randomly. And that’s what the machine stands for, too. It also stands for a certain drivenness that keeps an artist working and sometimes tortures her.

What’s next for you?
I’m going to continue working in my alchemical laboratory, of course. I’m also focussing on my own archival system. And then I’ll be going abroad: Brussels, England, the USA…

Thank you very much. Do you have any closing comments?
An important word for me as of late is “serendipity”. It means that in the best experiments one can only say in retrospect what one should have searched for. The good thing about an experiment, after all, is that at the beginning you don’t nail down what the result should be, but instead allow yourself to be surprised and perhaps discover something completely different than what you originally sought. 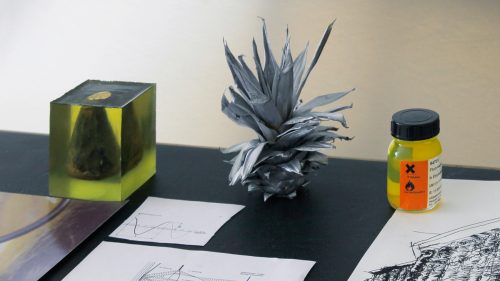 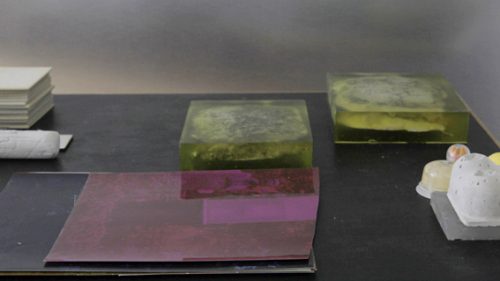